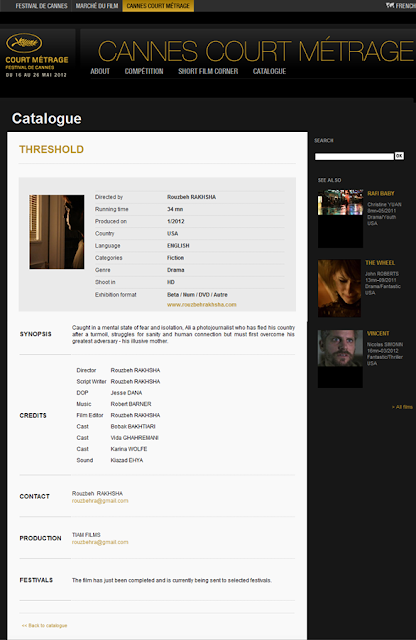 Synopsis: Caught in a mental state of fear and isolation, Ali a photojournalist who has fled his country after a turmoil, struggles for sanity and human connection but must first overcome his greatest adversary- his illusive mother.

On March 13th, Les Percussions de Strasbourg performed at Hertz Hall at UC Berkeley as part of the 2011 season of Cal Performances. This is the 50th anniversary of the ensemble and though it was a rainy afternoon, the concert was a compete success and worth the trudge across town to see an extraordinary ensemble.

Edgard Varese’s composition Ionisation was the first piece on the program. The ensemble’s performance was fresh and exciting. The dynamic range of the piece exploded across the auditorium and at times filled every particle of available space. Most enjoyable was watching six percussionists perform parts that were originally written for thirteen performers.

Ondoyants et Divers composed by Edmund Campion was the second piece on the program and the most effective and intriguing piece of the first half of the concert. The piece seemed to be organized in three sections. During the middle section, each performer focused on the same single instrument and then together moved to another instrument finally ending up with an extremely effective and uniform gesture focused on the triangle. At the pinnacle of this gesture, the triangles rang in a sonorous pattern of vibrations which the composer allowed to slowly die out. The final section focused on gestures that used all of the instruments in cooperative interplay. At a number of points throughout the piece, musical gestures were passed from one instrument to the next, in the order the musicians were positioned, creating a visually engaging wave-like pattern.

The third piece, Le Livre des claviers, composed by Philippe Manoury was written for a sextet of sixxens, a recently invented new acoustic percussion instrument. The piece employed little subtlety or timbral exploration of this fascinating new instrument, focusing instead on rhythmic complexity. The inharmonicity inherent in the instrument at loud volumes gave an fascinating clacking sound however seemed overused by the Manoury rendering the timber of this new instrument ineffective. In contrast Refontes composed by Raphael Cendo was a welcome surprise. The electronics blended well with the ensemble and Cendo utilized a number of interesting playing techniques such as: scraping the instruments and flapping a large plastic sheet back and forth achieving an interesting warbling, sci-fi like, Theremin sounding gesture.

The final piece of the evening was Yoshihisa Taira’s piece Hierophonie V, a well programmed closing piece. The composer employed highly effective yells and shouts as integral parts of the piece. The form of the piece was well written starting off very intense and having a middle section that explored more subtle gestures. The final section was highly effective and visually dramatic as one of the percussionists stepped out to the middle of the stage and began drumming an ostinato that built up until the finale at which time two other performers joined the ostinato and ended the piece with a dramatic crescendo.